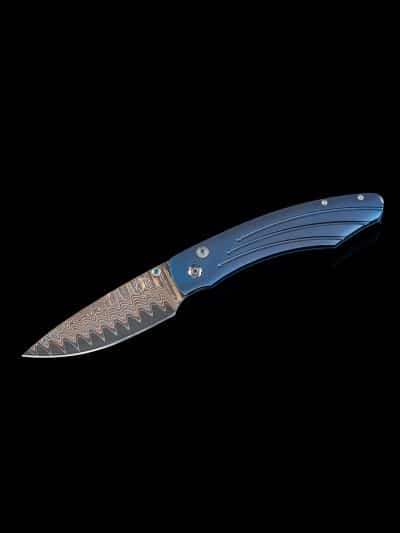 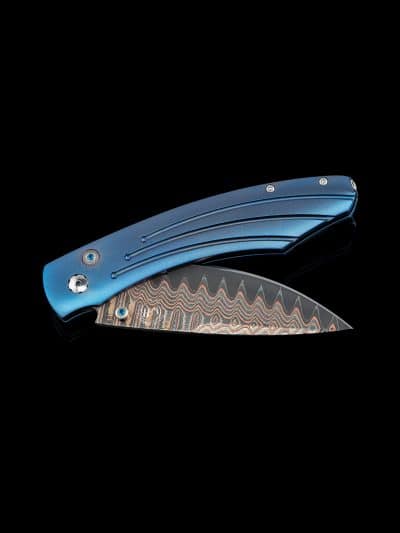 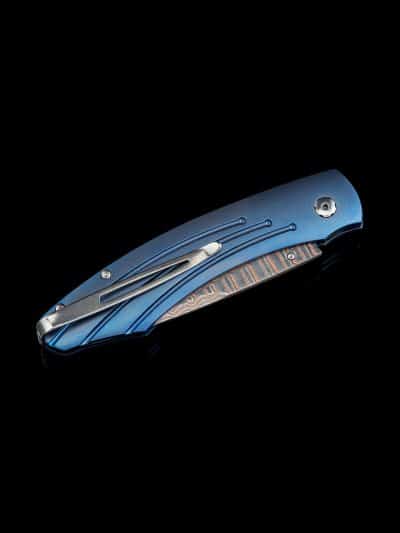 The Spearpoint ‘Skyfall’ features a light and resilient frame in aerospace-grade titanium. The blade is in William Henry’s signature ‘Copper Wave’ damascus steel with an extra sharp core in VG-5 steel; the one-hand button lock and the thumb stud are set with Kashmire blue topaz gemstones.
A remarkable design that gives you an instrument with a full-size secure grip, and a versatile deep-belly blade, the Spearpoint epitomizes William Henry’s core philosophy – that superlative function deserves to be elevated to superlative art.
The ‘Skyfall’ features some of the exotic materials and hand-forged metals that are the hallmark of William Henry’s collections; a distinctive personality statement to be worn and used for a lifetime.

COPPER WAVE DAMASCUS
This beautiful William Henry exclusive blade steel (patent pending) incorporates copper and stainless steel into a 45 layer Wave Damascus that features a core of VG-5 stainless steel. This steel attains a hardness of HRC 59, excellent by any standards, at the cutting edge.

KASHMIR BLUE TOPAZ
Topaz is a rare, extremely hard gemstone with an exceptionally wide color range that, besides brown, includes various tones and saturations of blue, green, yellow, orange, red, pink, and purple.
The ancient Greeks believed that topaz gave them strength. In Europe during the Renaissance (the period from the 1300s to the 1600s) people thought that topaz could break magic spells and dispel anger. For centuries, many people in India have believed that topaz worn above the heart assures long life, beauty, and intelligence.

Today, topaz is one of the US birthstones for November, while blue topaz is a birthstone for December