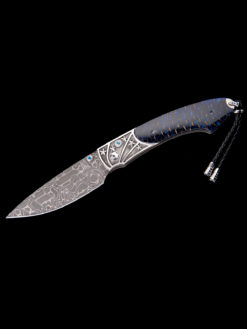 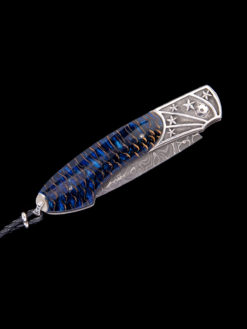 The Spearpoint ‘Blue Star’ features a beautiful frame in hand-carved sterling silver, inlaid with Norway Blue Spruce pine cone. The blade is hand-forged ‘Intrepid damascus by Chad Nichols; the one-hand button lock and the thumb stud are set with Kashmir Blue topaz gemstones.
A remarkable design that gives you an instrument with a full-size secure grip, and a versatile deep-belly blade, the Spearpoint epitomizes William Henry’s core philosophy – that superlative function deserves to be elevated to superlative art.
The ‘Blue Star’ features some of the most exotic materials, artistry and forged metals that are the hallmark of William Henry’s collections; a timeless heirloom to be proudly worn and used for a lifetime before being handed-down to another generation.

CARVED STERLING SILVER
Carved Silver is done by hand with chisels and rotary tools. William Henry works with the finest silversmiths to create elaborate (and durable) carvings in sterling silver. In many cases, we use colored sapphires and other precious stones, set in 18K gold bezels, to further decorate these masterful carvings.

SPRUCE PINE CONE
One of the largest, hardiest and most adaptable spruce in the world, Norway blue spruce is a native of Europe, and is commonly called the mountain spruce there. Due to its hardiness and adaptability it has been introduced and thrives in many areas of the world. William Henry uses the pinecones from this majestic tree to create beautiful inlays for our knives. Before use, the pinecone sections are stabilized with a color pigmented resin which enhances the contrast of the veneer and gives the scales a blue or red tonality. All our spruce cone is sourced responsibly.