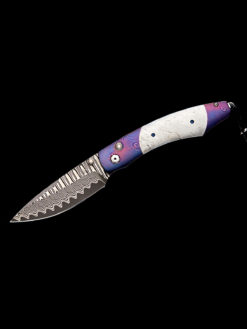 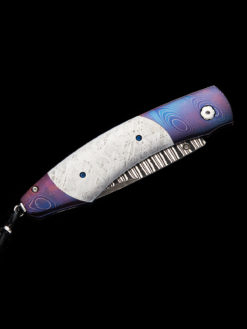 The Spearpoint ‘Trek’ features a beautiful frame in heat-blued & hand-forged ‘Twist’ damascus by Chad Nichols, inlaid with a mesmerizing meteorite scale (a section of the Gibeon meteorite which fell in the desert of Namibia in prehistoric times). The blade is ‘Wave’ damascus with an extra strong core of ZDP-189; the one-hand button lock and the thumb stud are set with diamonds.
A remarkable design with a full-size secure grip and versatile deep-belly blade, the Spearpoint epitomizes William Henry’s core philosophy: superlative function deserves to be elevated to superlative art. The ‘Trek’ features some of the exotic materials that are the hallmark of William Henry’s collections; a timeless heirloom to be proudly worn and used for a lifetime.

METEORITE
William Henry uses beautiful sections of the Gibeon Meteorite, which fell in prehistoric times in Namibia. It was named after the nearest town: Gibeon
The fragments of the meteorite in the strewn field are dispersed over an elliptical area 171 miles long and 62 miles wide; it was discovered by the local Nama people and used by them to make tools and weapons.
In 1836 the English captain J. E. Alexander collected samples of the meteorite and sent them to London. There John Herschel analyzed them and confirmed for the first time the extraterrestrial nature of the material.

The Gibeon meteorite is composed of an iron-nickel alloy containing significant amounts of cobalt and phosphorus. The crystal structure of this meteorite provides a fine example of the Widmanstätten patterns: these figures of long nickel-iron crystals are of extraterrestrial origin, and cannot occur naturally on earth.  As a purely  natural material, the patterns may include small inclusions, distinctive and unique to each item we produce.

DIAMOND
The name diamond is derived from the ancient Greek αδάμας (adámas), “proper”, “unalterable”, “unbreakable”. Diamonds have a long history as beautiful objects of desire. In the first century AD, the Roman naturalist Pliny stated: “Diamond is the most valuable, not only of precious stones, but of all things in this world.”

The world’s love of diamonds had its start in India, where diamonds were gathered from the country’s rivers and streams. Some historians estimate that India was trading in diamonds as early as the fourth century BC.
The popularity of diamonds has risen since the 19th century because of increased supply, improved cutting and polishing techniques. Aside from our jewelry collection, William Henry also inlays diamonds in pocketknives, pens, and money clips.