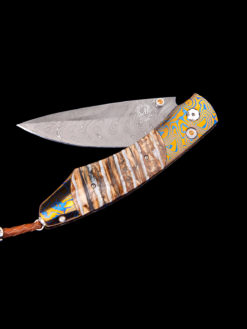 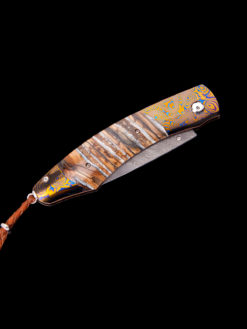 The Spearpoint ‘Legacy’ features a heat-colored, hand-forged frame of ‘Moku-Ti’ (titanium laminate consisting of 6AL-4V and commercially pure titanium) by Chad Nichols, inlaid with 10,000 year-old fossil Woolly Mammoth tooth. The blade is hand-forged ‘Boomerang’ damascus, also by Chad Nichols; the one-hand button lock and the thumb stud are set with citrine gemstones.
A remarkable design that gives you an instrument with a full-size secure grip, and a versatile deep-belly blade, the Spearpoint epitomizes William Henry’s core philosophy – that superlative function deserves to be elevated to superlative art.
The ‘Legacy’ features the perfect balance between elegance, function, and hi-tech materials; a distinctive personality statement to be worn and used for a lifetime.

MOKU-TI
Similar to the technique used to forge damascus, Moku-ti is created with several layers of 6AI/4V Titanium and CP Titanium, fused and welded together to form a billet. The layered section is then artistically exposed revealing patterns of banding and mottling reminiscent of flowing water, or mimicking the layered design of wood grain.
The patterns vary depending on the blacksmith that works the billet. Our Moku-Ti billets are forged with a minimum of 300 layers by a handful of the very best blacksmiths/artists in the U.S.

FOSSIL MAMMOTH TOOTH
From a Woolly Mammoth that walked the Earth at least 10,000 years ago.
Modern humans coexisted with woolly mammoths during the Upper Paleolithic period when they entered Europe from Africa between 30,000 and 40,000 years ago. Prior to this, Neanderthals had coexisted with mammoths during the Middle Paleolithic and up to that time. Woolly mammoths were very important to Ice Age humans, and their survival may have depended on these animals in some areas.

The woolly mammoth is the next most depicted animal in Ice Age art after horses and bisons, and these images were produced up to 11,500 years ago. Today, more than five hundred depictions of woolly mammoths are known, in media ranging from carvings and cave paintings located in 46 caves in Russia, France and Spain, to sculptures and engravings made from different materials.

William Henry’s fossil Mammoth tooth is harvested in Alaska and Siberia. It is a rare and mesmerizing material, a living testimony of the dawn of Mankind.