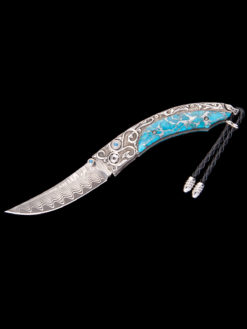 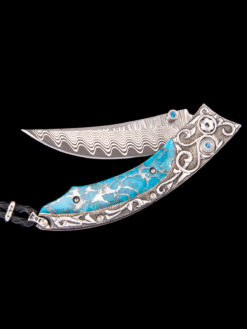 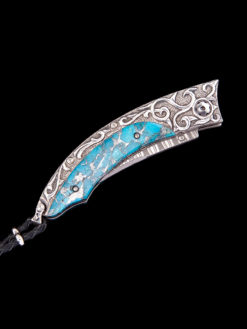 The Persian ‘Tempest’ features a beautiful frame in hand-carved sterling silver, inlaid with ‘Zinc Matrix’ Kingman turquoise. The blade is ‘Wave’ damascus steel with an extra strong core of ZDP-189. The one-hand button lock and the thumb stud are set with kashmir blue topaz gemstones.
The Persian is an elegant synthesis of dramatic lines, graceful curves, and exquisite materials. A bold interpretation of a timeless design, the ‘Tempest’ also features some of the exotic materials and metal work that are the hallmark of William Henry’s collections; a timeless heirloom to be proudly worn and used for a lifetime before being handed-down to another generation.

CARVED STERLING SILVER
Carved Silver is done by hand with chisels and rotary tools. William Henry works with the finest silversmiths to create elaborate (and durable) carvings in sterling silver. In many cases, we use colored sapphires and other precious stones, set in 18K gold bezels, to further decorate these masterful carvings.

SPESSARTITE
Spessartite is an orange to red-brown gemstone that belongs to the large and varied garnet species. While it was once just a collector’s gem, spessartite, an orange variety of garnet, made its move into the mainstream during the 1990s when new deposits were discovered in Africa.
Like most garnets, spessartite is typically untreated, so the beautiful color and clarity that you see in them is just as nature created it. Spessartite garnet is named after its first discovery in Spessart, Bavaria, in the mid 1800’s.