Skip to content
View cart “Bremont ALT1-C Chronograph – Cream” has been added to your cart.
Add to Wishlist 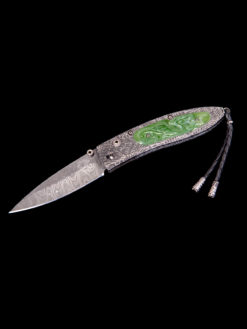 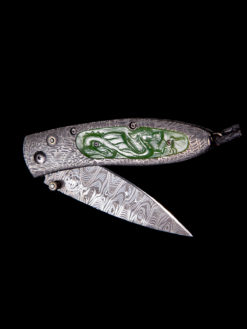 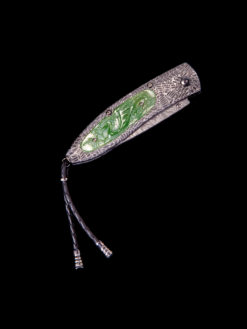 The Monarch ‘Artemis’ features a beautiful frame in hand-forged ‘River Rock’ damascus by Chad Nichols, inlaid with carved green jade scales. The blade is hand-forged ‘Hornets Nest’ damascus by Mike Norris. The one-hand button lock and the thumb stud are set with spinel gemstones.
The Monarch is a simple design that is easy on the eye and effortless in the hand. The ‘Artemis’ features some of William Henry’s signature forged metals, and represents the perfect synthesis between elegance, function, modern and exotic materials; a distinctive personality statement to be worn and used for a lifetime.

JADE
With its beauty and wide-ranging expressiveness, jade has held a special attraction for mankind for almost 7,000 years.
Still today, this gem is regarded as a symbol of the good, the beautiful and the precious. It embodies the Confucian virtues of wisdom, justice, compassion, modesty and courage, yet it also symbolises the female-erotic.
It comes in many fine nuances of green, but also in shades of white, grey, black, yellow, and orange and in delicate violet tones. Only in the very finest jade is the colour evenly distributed.