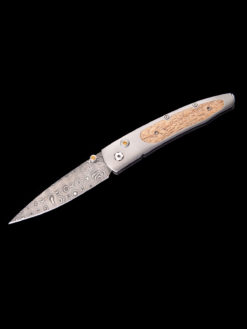 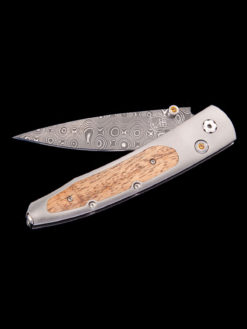 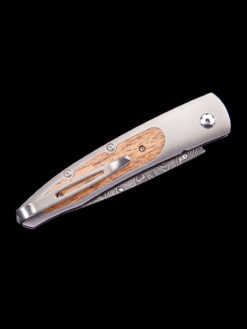 The Lancet ‘Lanai’ features a frame in aerospace grade titanium, inlaid with curly koa wood. The blade is hand-forged ‘Jet Stream’ damascus. The one-hand button lock and thumbstud are set with citrine gemstones. Sleek, elegant, refined, and comfortable in the hand and to the eye, the Lancet defines the essential gentleman’s folder in the modern world. The ‘Lanai features some of the exotic materials and hand-forged metals that are the hallmark of William Henry’s collections; a distinctive personality statement to be worn and used for a lifetime.

CURLY KOA
Koa is a fabled tree, and wood, sourced responsibly from the Hawaiian islands. It is reddish brown in color, takes a beautiful polish, and can occasionally offer very fine figuring/curl and chattoyance. William Henry uses only the highest grade of figured Koa (as available) for our work, resin-stabilized for durability.