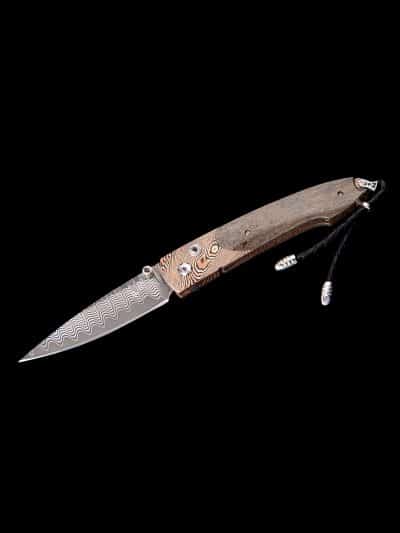 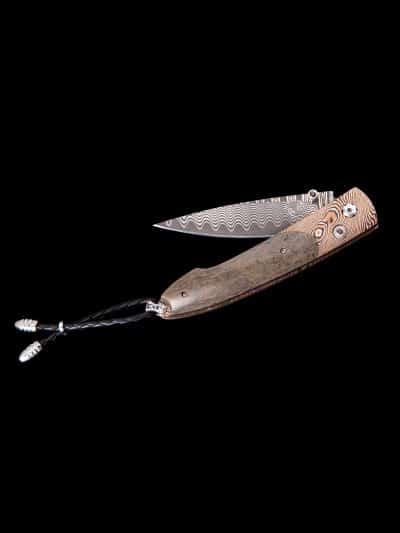 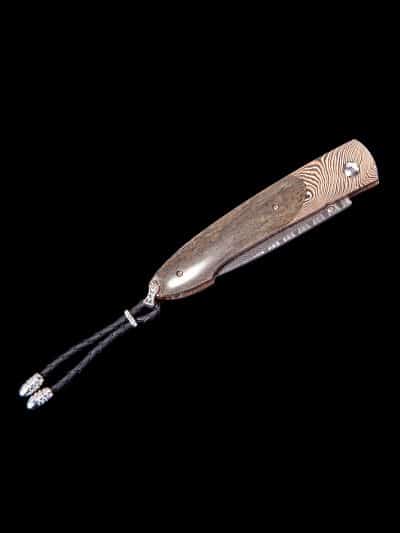 The Lancet ‘Barrow’ features a beautiful frame in hand-forged Mokume Gane by Mike Sakmar, inlaid with a stunning piece of 10,000 year-old fossil Woolly Mammoth bone. The blade is our exclusive ‘Wave’ damascus with a ZDP-189 core. The one-hand button lock and the thumb stud are set with sapphires.
Sleek, elegant, refined, and comfortable in the hand and to the eye, the Lancet defines the essential gentleman’s folder in the modern world.
The ‘Barrow’ features some of the most exotic materials and hand-forged metals that are the hallmark of William Henry’s collections; a timeless heirloom to be proudly worn and used for a lifetime before being handed-down to another generation.

WAVE DAMASCUS WITH ZDP-189
William Henry’s patent pending Wave Damascus features a ZDP-189 core (HRC 67) clad with alternating layers of stainless steel and nickel silver. The billet, 45 layers in all, is patterned with a custom die to create the undulating waves that emerge across the bevels of the blade. This material can be dark-etched for contrast, or etched and re-polished for a more subtle pattern.

MOKUME GANE
Mokume gane was developed in the 1600s in Japan, allegedly by an Akita prefecture metalsmith named Denbei Shoami (1651 to 1728). He used the mokume gane technique to dress up samurai swords.
The mokume gane technique involves fusing several layers of different metals, and artistically exposing sections of lower layers. The metal is often made to display a pattern that mimics wood grain. A variety of metals can be used to give different arrays of coloration.
Layers of metal are pressed together and fused with heat. The forged layers are carved to expose lower layers and are then pressed again. The carving and pressing is repeated to develop the pattern.

Today, some of the finest mokume in the world is made here in the USA, and William Henry is proud to offer a range of this material on our collections. Our mokume is generally made with copper, brass, and nickel silver in either a 45 or 89 layer billet, forged and patterned by hand.

FOSSIL MAMMOTH BONE
From a Woolly Mammoth that walked the Earth at least 10,000 years ago.

Modern humans coexisted with woolly mammoths during the Upper Paleolithic period when they entered Europe from Africa between 30,000 and 40,000 years ago. Prior to this, Neanderthals had coexisted with mammoths during the Middle Paleolithic and up to that time. Woolly mammoths were very important to Ice Age humans, and their survival may have depended on these animals in some areas.

The woolly mammoth is the next most depicted animal in Ice Age art after horses and bisons, and these images were produced up to 11.500 years ago. Today, more than five hundred depictions of woolly mammoths are known, in media ranging from carvings and cave paintings located in 46 caves in Russia, France and Spain, to sculptures and engravings made from different materials.

William Henry’s fossil Mammoth bone is harvested in Alaska and Siberia. It is a rare and mesmerizing material, a living testimony of the dawn of Mankind.