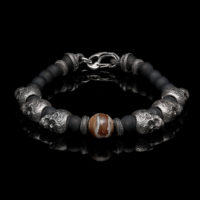 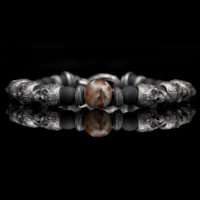 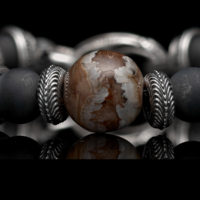 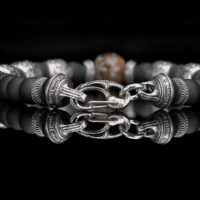 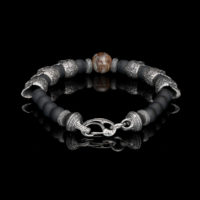 The ‘La Paz’ is a beautiful bracelet that equally belongs to the past, the present and the future. Center bead is hand-crafted from 10,000 year old woolly mammoth tooth, harvested from the seabed and brought into the light to dry for 2 years before we start processing. Surrounded by finely sculpted sterling ‘sugar skull’ beads and accents interwoven with frosted black onyx. Clasp also in sterling silver.
Just enough attitude to get attention when you want it, just elegant enough to belong to any occasion.

UNIQUE MATERIAL
This piece features one of our hallmark materials.

These natural materials owe their patterns and distinctive color palette to the specific and often unique conditions in which they came to exist.Because of the fossilization process, soil composition and meteorology, these rare fossils, exotic woods, shells and rocks can show dramatic differences in color and pattern, making every piece a one-of-a-kind.

When you purchase a piece featuring our Unique Materials logo, the object you receive is indeed truly unique. It becomes a distinctive symbol of your own character, and an integral part of your living legacy; a rare and precious personality statement that will accompany you for a lifetime before being handed down to another generation.

Please note that for these reasons, when you buy a William Henry featuring one of our unique materials, the piece you receive may look different from the one shown on our website. A truly original one-of-a-kind.

BLACK ONYX
Onyx is a stone that appears in various cultures and it is regarded as one of the most popular gemstones in the world.
It is a type of oxide mineral that has dominant silica ingredients. The stone itself is famous for beautiful, silky luster that also looks vitreous if the stone is already treated and polished. Black colored onyx is of course the most famous and sought out variant. Onyx is also part of gemstone metaphysical theories and gemstone healing therapies.

FOSSIL MAMMOTH TOOTH
From a Woolly Mammoth that walked the Earth at least 10,000 years ago.
Modern humans coexisted with woolly mammoths during the Upper Paleolithic period when they entered Europe from Africa between 30,000 and 40,000 years ago. Prior to this, Neanderthals had coexisted with mammoths during the Middle Paleolithic and up to that time. Woolly mammoths were very important to Ice Age humans, and their survival may have depended on these animals in some areas.

The woolly mammoth is the next most depicted animal in Ice Age art after horses and bisons, and these images were produced up to 11,500 years ago. Today, more than five hundred depictions of woolly mammoths are known, in media ranging from carvings and cave paintings located in 46 caves in Russia, France and Spain, to sculptures and engravings made from different materials.

William Henry’s fossil Mammoth tooth is harvested in Alaska and Siberia. It is a rare and mesmerizing material, a living testimony of the dawn of Mankind.