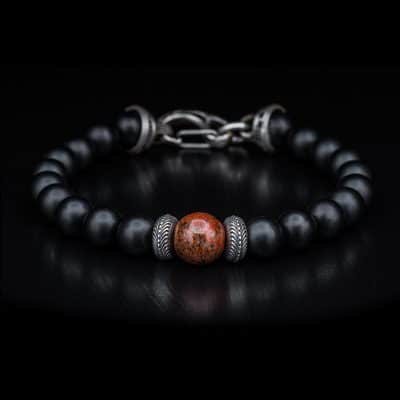 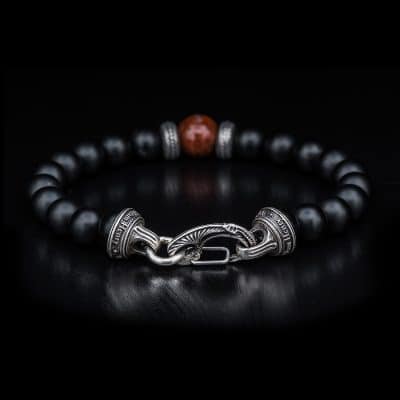 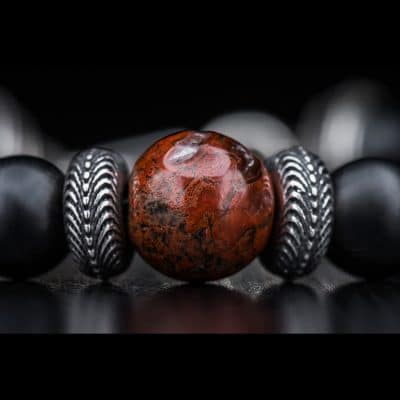 This bracelet is built around a centerpiece that features a bead crafted from 100 million year-old dinosaur bone found in the American West. Every bead, by the very nature of the extraordinary material, is unique in pattern and color. Flanked by sterling silver and frosted black onyx and with a comfortable and secure sterling clasp system. Whether you are in denim or business attire, the ‘Gentis’ wears beautifully and adds your own distinct style. Great on its own or layered with other piece.

BLACK ONYX
Onyx is a stone that appears in various cultures and it is regarded as one of the most popular gemstones in the world.
It is a type of oxide mineral that has dominant silica ingredients. The stone itself is famous for beautiful, silky luster that also looks vitreous if the stone is already treated and polished. Black colored onyx is of course the most famous and sought out variant.

FOSSIL DINOSAUR BONE
Dinosaur Bone is probably the most exotic of our fossil materials — the fossil comes from a 100 million year-old Apatosaurus. Found and sourced in Utah, dinosaur bone offers the possibility of owning one of the most ancient zoological testaments of the planet. The colors can vary from red to brown, black and green, depending on the minerals surrounding the bone as it became petrified.