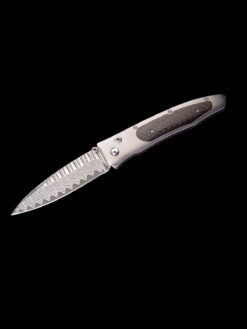 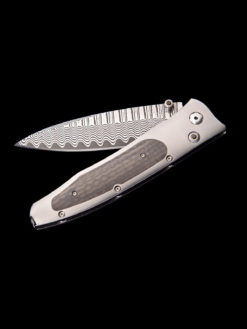 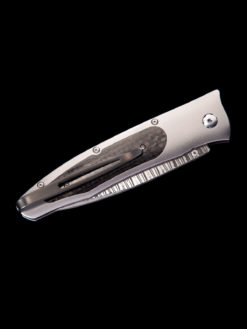 The Gentac ‘Centrifuge’ features a light and resilient frame in aerospace grade titanium, inlaid with carbon fiber. The blade is ‘Wave’ damascus with an extra strong core of ZDP-189. The one-hand button lock and the thumb stud are set with spinel gem stones.
An exceptional design that offers rigorous performance in a sleek, comfortable knife, the Gentac is also the perfect canvas to showcase William Henry’s range of exotic materials and techniques.
The ‘Centrifuge’ features the craftsmanship, hi-tech, and forged metals that are the hallmark of William Henry’s collections; a distinctive personality statement to be worn and used for a lifetime.

Carbon fiber is a material consisting of microscopic fibers composed mostly of carbon atoms. The carbon atoms are bonded together in crystals that are more or less aligned parallel to the long axis of the fiber. The crystal alignment gives the fiber high strength-to-volume ratio. Several thousand carbon fibers are bundled together to form a tow, which may be used by itself or woven into a fabric.
Carbon fiber’s properties, such as high stiffness, high tensile strength, low weight, high chemical resistance, high temperature tolerance, make them very popular in aerospace, civil engineering, military, competition sports. William Henry uses the highest grade, and beautifully textured carbon fiber for its collections of jewelry, knives, money clips and cufflinks.