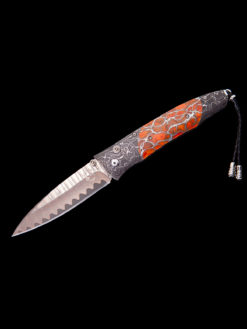 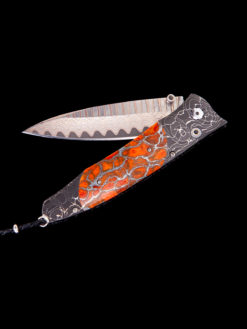 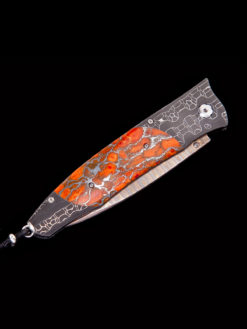 The Gentac ‘Blazing’ features a beautiful frame in etched ‘T-Rex’ damascus by Delbert Ealy, inlaid with ‘zinc matrix’ apple coral. The blade is William Henry’s ‘Copper Wave’ damascus with VG-5 core; the one-hand button lock and the thumb stud are set with spinel gemstones.
An exceptional design that offers rigorous performance in a sleek, comfortable knife, the Gentac is also the perfect canvas to showcase William Henry’s range of exotic materials and techniques.
The ‘Blazing’ features some of the exotic materials and forged metals that are the hallmark of William Henry’s collections; a distinctive personality statement to be worn and used for a lifetime.

‘COPPER WAVE’ DAMASCUS
This beautiful William Henry exclusive blade steel (patent pending) incorporates copper and stainless steel into a 45 layer Wave Damascus that features a core of VG-5 stainless steel. This steel attains a hardness of HRC 59, excellent by any standards, at the cutting edge.

‘ZINC MATRIX’ APPLE CORAL
Apple coral is part of the species of corals known as melithaea sponge, which is commonly found on the ocean floors around the waters of Taiwan, Indonesia and southern China. The destruction of coral reefs around the world led to a global ban on coral mining and collecting in 1992, but apple coral was not included.
The United States has placed a ban on shipping coral in and out of the country, but there is no ban on the melithaea sponge corals.
Our apple coral is infused with zinc to obtain a beautiful and original pattern.