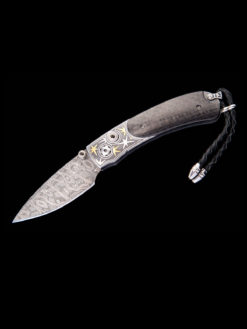 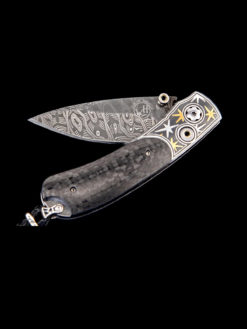 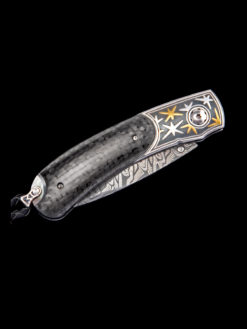 The Kestrel ‘Starship’ features a beautiful frame in 24K gold and silver koftgari, inlaid with carbon fiber. The blade is ‘Hornets Nest’ damascus hand forged by Mike Norris; the one-hand button lock and the thumb stud are set with spinel gemstones.
The Kestrel is a compact but versatile folder that works and presents beautifully in any situation; the design, which offers a deep finger groove at the intersection between the handle and blade, makes this knife remarkably comfortable in the hand while being very small and easy to carry.
The ‘Starship’ features some of the exotic materials, artistry, and hand-forged metals that are the hallmark of William Henry’s collections; a timeless heirloom to be proudly worn and used for a lifetime before being handed-down to another generation.

KOFTGARI
Koftgari is the name for fine gold (and/or silver) patterns inlayed into parkerized steel. This ancient Indian technique, done entirely by hand, involves creating a very fine cross-hatch grid in the steel and then burnishing 24K gold (and/or silver) into a pattern that is bound by the cross-hatch. Parkerizing involves soaking the steel in a boiling solution of salts to oxidize the steel a deep brown/blue. Beautiful and timeless, koftgari is nearly a lost art.

CARBON FIBER
Carbon fiber is a material consisting of microscopic fibers composed mostly of carbon atoms. The carbon atoms are bonded together in crystals that are more or less aligned parallel to the long axis of the fiber. The crystal alignment gives the fiber high strength-to-volume ratio. Several thousand carbon fibers are bundled together to form a tow, which may be used by itself or woven into a fabric.
Carbon fiber’s properties, such as high stiffness, high tensile strength, low weight, high chemical resistance, high temperature tolerance, make them very popular in aerospace, civil engineering, military, competition sports. William Henry uses the highest grade, and beautifully textured carbon fiber for its collections of jewelry, knives, money clips and cufflinks.